Dr. Wolf is just like his character, ever-changing. A beautifully blended balance of fresh blueberries and rich warm tobacco.  Beware of Dr. Wolf, if you don't come prepared into the night!

With a complex scent profile of fresh blueberries, warm tobacco, aged mahogany, and soft musk this is a blend you truly do not want to miss.

Blueberries, Tobacco and Mahogany: The Beast and The Choice

"What, pray tell my good young hero, makes a monster a man and a man a monster?"

The faint scent of fresh, hand-picked ripe blueberries hangs in the air, mingling with rich, hazy tobacco smoke from the gentleman's pipe seated across from you. Along with the scent of berries and his pipe's tobacco, you can smell the faint hint of the well-aged, well-polished mahogany wood until the room is a heady mix of fragrances that you must admit is quite intriguing. As intriguing as the man, this Dr. Wolf, who sits across from you now, two massive hands crossed over the head of a snarling wolf's head cane.

The question is unexpected. For you, young and ambitious hero, you seek to change the rot of the world from within its very foul ranks, to fight the Phthalate spirits raised by wicked souls in the dead of night. And who better to start with than the strange and whispered man of the night—this Doctor Wolf.

You pause for a time, stroking a dry and brittle beard suffering from neglect and harsh weather. You've lived roughly these last few weeks, and the only time you have has been spent fighting and surviving. You are fighting against one more injustice. One more evil. However, you can't help but admire the deep, golden-wheat beard that spills full and sleek from the toothily grinning Dr. Wolf across from you. There is a collection of bottles behind the man on a silver platter, sunlight gently liming them in a halo of golden light—like the man's beard itself. You can't help but catch the name on the labels. 'Dr. Wolf, A Blueberry & Tobacco Beard Oil,' reads one. 'Beard butter,' reads another. 'Beard wash and Conditioner,' reads the second, 'Beard balm,' reads the third, marked with the infamous 'Fable Beard CO.' company you've heard about so much.

The man across from you shifts, and for a split second, as you turn back to him, you swear his beard, as if alive with its thoughts, had briefly moved in a breeze you did not feel.

"I suppose," you begin reluctantly," the difference is choice. Whether man or monster, what each chooses to do or not do, creates one or both. Who truly is the monster if a monster picks mercy over a man who chooses violence and ignorance?"

The man in the fetching derby hat leaned forward, a strange bright glint in his eyes as he reached behind him and handed you one of those glinting bottles of beard oil.
"Welcome, hero, to a league of extraordinary and unbelievable beards. Your first choice, I applaud enthusiastically. I look forward to working with you."

At Fable Beard CO., it's all about your story, beard, skincare, and journey. With all-natural ingredients such as cold-pressed oils, Phthalate, DHT-inhibitor-free ingredients, and beard and skincare bursting with vitamins—your glorious path to an even more glorious beard and healthy skin with head-turning fragrances begins now!
Tell us, brave one, what story will you create with us?

Let customers speak for us I am the type of person who conducts a fair amount of research before trying a new product. My research on the quality beard oils indicated that a mix of jojoba, argan, sweet almond, coconut and castor oils is the best to ensure that Vitamin E and other nutrients are absorbed into the beard. The next very important ingredient is the scent profile. You won't be disappointed with the Scribe! 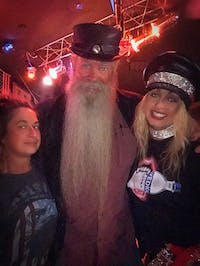 Smells great but very femanine. I have it to my lady. But 5 stars for a great scent still and great company Jon McDaniel
07/02/2022
The Paladin is smoking the competition, according to the wife.

My wife isn't a huge fan of me spending more on my beard than she does on her hair. Needless to say, she is never enthusiastic about the new scents I get from Fable. Although, she actually said she liked this one. I was shocked nothing negative was said, let alone an actual positive response. Great work Fable team. I totally look forward to trying your new products. This scent is such a staple in my husbands collection, it smells great any time of year and it’s one of my personal favorites 😍 Bought my first butter from here last week, figured I'd try the mystery oil as I couldn't pick between all the scents. I got the inventor scent and it's by far the best smelling beard oil I've ever tried and lasts through a 8hr work day. Loved it so much I immediately bought butter in the same scent and another 3 oils to try. Let me first start by saying I bought this for my husband along with the rest of the Every day Hero collection because what woman wouldn't love burying her face in a big fluffy mess of cotton candy!! We not only love the smell but it makes his beard deliciously soft and shiny! I love this collection! This conditioner is amazing in any scent.. but cotton candyyyyyy.... coooooommmmeeeeee on.. its like you know me or something!! 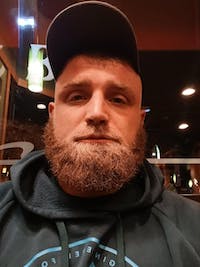 Gunslinger so far has been my go-to . I received the hero product in a Father's Day give away wore it all and man I was smelling like double strawberry cheesecake all day witch is't a bad thing . However it was a little to sweet for me .I'm more of a wood ,tobacco, cherry ,fresh cut grass ,black pepper smell guy I also have tried the wolf that's a great one to think I'll get the whole set next time of the wolf or the Patriot

This combines the delicious sweetness of peanuts and cracker jacks but puts a nice spin on it to turn it into a strong scent that you want to wear all day. Fable really hit it out of the park on this one! I was skeptical about a blueberry scent in my beard. But Dr. Wolf is super complex, aromatic, sweet, and to quote one of my coworkers "delicious". It does have a hint of sticky sweet blueberry, but it's a beautiful smell. There's also hints of a creamy vanilla, leather, virgina pipe tobacco, and ambergris. It's actually a very thought provoking fragrance. I actually look forward to applying Dr. Wolf, the smell makes me feel happy and confident. All this on top of how good it conditions and moisturizes...there's no better beard care on the market. That's the truth with cheese on it...Jack! This was my first time buying from you guys and it was a great experience. The oils are great. They feel nice and smell good. The added adventurer nite and card was a lot of fun too! I'm about half way where I want mine to be. I really like the products and will be buying more! This & "The Inventor" is where it's at for me when it comes to cologne scents from fable. 🔥